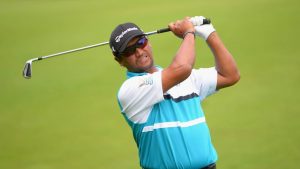 Michael Campbell will be inducted into the Māori Golf Association’s Hall of Fame.

The Ngāti Ruanui, Ngā Rauru descendant is one of Māoridom’s, and indeed one of New Zealand’s most successful golfers.

This week, Campbell attended the 82nd anniversary of the Māori Golf Tournament in Taupō to educate rangatahi Māori about playing professionally.

“Very appreciative of this role, of this label, of getting an amazing award – it’s been a long track along the way. I’ve worked very hard for it,” he says.

Former Māori golfer Phillip Tataurangi, who won alongside Campbell at the 1992 Eisenhower Trophy, said, “It’s honouring his family and all the people that have contributed at Tītahi Bay way back in the early days when he was a snotty-nose little kid with an earring and wanting to rebel against everything.

“They managed to keep him on track and now he’s one of the most recognisable sports people we’ve ever produced.”

Campbell, now a retired New Zealand professional golfer, is best known for winning the 2005 US Open and the richest prize in golf, worth $1,7 million (NZD) and the HSBC World Match Play Championship, in the same year.

“I think you got to go back into my career I would look at how I defined as a player and this is where it started for me.  When I was 19 years old, (I) played here at the Māori championship,” explained Campbell.

The 49-year-old is currently living in Spain. He says he’s noticed a decline in players over the last 10 years in New Zealand and says he wants to help keep the game alive.

“It’s sad for me to see, I’ve seen a lot of golf courses closed in the last 10 years or so in New Zealand and that’s an indication maybe we get some help and hopefully I have a pretty good project in the future which means I will be involved with New Zealand golf and promote the game and see where it should be.”

Campbell says he will announce a plan to develop New Zealand golf by the end of this month.