THE Lukin family’s $289 million dollar Port Lincoln development has State Government approval, opening the way for up to 280 jobs a year during the next decade.

The project includes a 300-500 block housing development in two residential areas on the 118ha site, as well as a major wharf revamp and an industrial precinct.

Work is expected to start within a year on upgrading the old BHP wharf to enable it to take Port Lincoln’s commercial fishing fleet and other vessels. 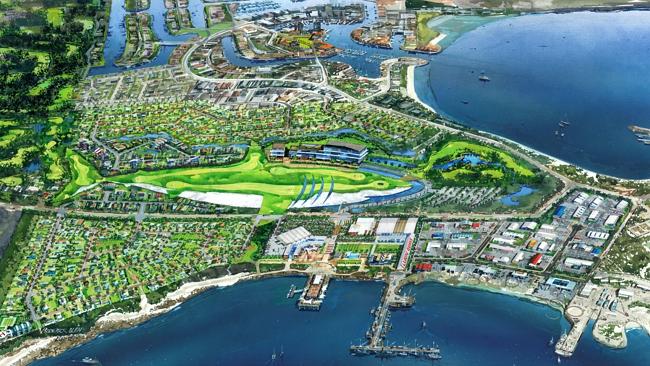 An artist’s impression of the original grand plan with a shark-shaped 18-hole international golf course.

“We’ve waited six years for this day so we are looking to be very proactive and to get the development under way as soon as feasible.”

Mr Lukin said he would be contact golf course designer Greg Norman to update him on the status.

Norman emerged as a favourite to design a proposed Great White Shark golf course in the development following a visit to the Lukin Corporation’s site last year. 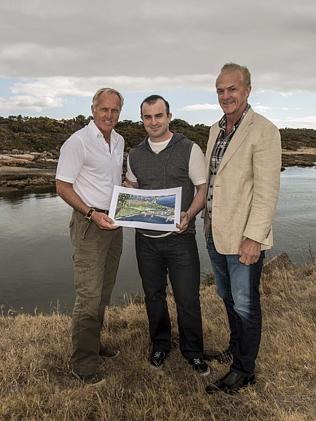 Golfing legend Greg Norman with Dean Lukin and his son Dean Jnr at the site of the project when it was proposed.

“We’ve focused on the housing development because we needed to get it through first, but at our next board meeting we will review all options for the golf course and the commercial development,” Mr Lukin said.

Deputy Premier John Rau said the rezoning would allow the investment of $289 million over 10 years towards the development.

Brisbane City Council has confirmed the appointment of...

The Marsden Golf Driving Range, located in the...

Golfers are accusing Auckland Council of foul play over a plan to develop courses into more versatile public spaces. The council is...

Parts of Northcote public golf course set aside for community use

A section of Northcote’s public golf course will be freed for community use in a small win for residents, who have been...

The NZCIG is excited to be full steam ahead with Golf Matters 2022, NZ Golf Conference and Expo! Please have a look...

Thousands of homes and apartments are proposed for coastal land in south-east Auckland, with much of the development on the privately owned...

There’s less than a week to go until WGD Palooza – the now annual virtual celebration of golf with...

Jack Nicklaus is Being Sued By the Nicklaus Companies

Nicklaus, 82, is being sued for breach of contract with the Nicklaus Companies, as well as tortious interference and...

Laguna National Golf Resort Club’s latest golfing offering is on track to be unveiled before the mid-way point of...

The Asian Tour is pleased to announce the appointment of David Rollo as Chief Operating Officer (COO). Rollo, who...

The back-up plan was to work as a greenkeeper at Bathurst Golf Club but such was Peter O’Malley’s talent...

Golf’s widespread physical, mental and social health benefits have been brought to life in a new video series from...